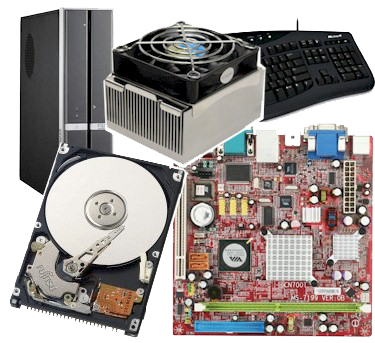 Computer Hardware is the term for the collaboration of components which make up a computer, which are known as its hardware. 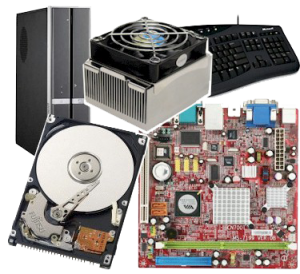 As you can tell by its name the Motherboard is the main component inside the PC Housing. It is the main piece of hardware, which allows communication of all the other pieces of the computer together, such as the processor, the SDRam and the Storage Devices.

This could be called the brain of the computer as it carries out most of the processes needed by the computer to function. Inside a CPU there are a collection of micro-switches, which manipulate data calculations trillions of times every second. Due to the enormous weight put on the Processor it becomes overheated and can sometimes calm up if not cooled properly, therefore it is cooled by a fan and a heat sink. Some PC enthusiasts even make use of water cooling processes to keep their CPUs at a low temperature. The data transmitted to and from the processor is processed by a Chipset, which distributes and listens to all the other parts of hardware.

The Hard Drive is the back room of the PC. This is where all images and programs are kept until it is required by the processor. For instance, your most recent pictures will stay on the hard drive until you choose it, then the processor asks for it it from the hard drive, manipulates the data and sends it to the graphics card to product the images on your screen.

The RAM is an important part of the computer, which stays between the hard drive and the CPU. The CPU calculates information so rapidly that the slower hard drive is unable locate and present it speedily enough. This then produces a bottleneck. The RAM is an very quick piece of memory, which also has fast access capabilities. The RAM will call data and programs from the Hard Drive just before it knows the CPU will want it, it then patiently waits for the Processor to access and call for data at lightening speeds. Anything which is not required is then moved to to the Hard Drive for safe keeping.

Sound Card translates data and turns it into data that sound devices get on with such as headphones or speakers. Some sound parts are built into the Motherboard but many experts prefer a separate sound card. A sound card is a extremely important part, which controls the recording studios of today.

The Graphics Card is the part of Computer Hardware which makes all the graphical images of a computer. The Graphics Card will take the data from the CPU and change it into images and film and forward this to the display device. Today, there are highly intelligent graphics cards, which have a reserved processor, on board (called a GPU, Graphics Processing Unit)

The name Optical Drive is any device, which employs laser technology to aquire information. Common types of Optical Drive are the DVD Drive or CD Drive. An example of the latest optical drive is the Blu Ray Drive.

Collectively this number of components are called the Computer Hardware. They merge into one to make the Workstations that we work on today. Every computer in todays world, is fundamentally the indentical, and has the computer components inside.