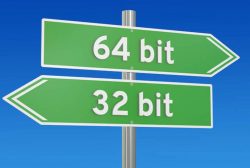 What is all this fuss over 32 bit and 64 bit computing? Which scores higher and in what areas of computing? Let’s try to find out. Before we proceed towards the 32 bit vs 64 bit OS comparisons section, let’s first understand what a 32 bit and a 64 bit means and what both of these terms pertain to in computing context. 32 and 64 bits may refer to a variety of things in terms of computing and data processing on computers. However, most of the time when we talk of 32 bits and 64 bits, we usually refer to either microprocessors or operating systems. In the context of microprocessors, these bit values refer to the breadth of the process registers which are small data storage components that are a part of the CPU architecture. In the context of operating systems, 32 bit and 64 bit refer to memory addresses which locate the state information, also known as the memory of the computing system, where either a computer hardware or a computer program can deposit data and later retrieve the same from it. Here, we’ll discuss the various differences between 32 bits and 64 bits in terms of processors and operating systems.

Got the idea? Now, wondering what the aforementioned hitch is? Well for a 64 bit computer operating system to unleash its true processing potential, your system must have more than 6 gigabytes of memory or else the 64 bit processor might actually appear slower than the 32 bit. However, a 64 bit operating system can easily run all 32 bit applications and processes. Due to its large memory and faster processing capacity, a 64 bit processor improves the process and memory handling capabilities of your computer, enhancing your system’s speed. You may not be able to tell the difference externally but rest assured, a 64 bit processor does give your computer performance a phenomenal boost!

Considering the processing and performance capabilities, a 64 bit OS is a clear winner. However, depending upon your requirements and budget, you may find a 32 bit system more beneficial and economical if you intend to use it for most basic personal, office and household computing purposes. In these cases, you won’t notice much difference between 32 bit and 64 bit systems. However, if its heavy duty animation, graphics, multimedia and gaming that your system is going to be used for, a 64 bit processor is the wisest option as faster processing translates into better multimedia quality, superior animation functions and hitch free gaming experience. So, take your pick after thoroughly evaluating your computing needs.